Posted on February 4, 2015 by pageintraining

I recently read about the new Speech Recognition Add-On for Google Docs from a post by Tech Coach Tammy Lind. I was excited about this Add-On because I had previously struggled with using some dictation apps in the past.

Speech Recognition includes the ability to select different languages to use. Dialects can also be selected, but the dialect regions are pretty large. English has several dialects, including United States, United Kingdom, Canada and New Zealand.

While testing out the add-on at school today, I found the add-on did a decent job of matching spoken words. When you dictate, the words show up in a small preview window on the right until the speaker pauses. Then the words appear in the document itself. The mistake that occurred was in the case of a homophone. Punctuation can be added by speaking the words representing those punctuation marks, which is something I will try out tomorrow. This will be a great accessibility tool for students. I can also see it being a great way to record brainstorming.

Here is a brief screencast I made showing how to install and start using Speech Recognition. I created this screencast using Screencastify.

For some additional ideas on using Speech Recognition, see this post from Ben Hommerding.

Google Classroom is an excellent new tool launching this week for schools using Google Apps for Education (GAFE). This tool will enable teachers to share and manage projects using Google Drive more easily. This is a solution that I know offers solutions teachers at my schools have been waiting for since we adopted GAFE. Several educators in my district have been trying out the beta version of Google Classroom over the last few weeks.

One thing I really like about Google Classroom is the ability to easily share out documents to students, whether those documents be direction sheets or a project for students to complete. Students can be given a file to view or have a personal copy named for them that will then have a specific naming convention already attached to it.

I found this collection of resources from www.mauilibrarian2.com invaluable in learning about Google Classroom.

To help prepare  teachers at my school for Google Classroom, I’ve created a few simple tutorials as well.

I am looking forward to using Google Classroom in my library classes. One of our first projects will be creating our Reading Footprints. Later in the year, I would love to use this tool to manage Genius Hour projects.

How are you looking forward to using Google Classrom?

It’s Monday! What Are You Reading From Picture Books to YA?

Posted on August 11, 2014 by pageintraining
Jen Vincent, of Teach Mentor Texts, and Kellee Moye, of Unleashing Readers, run the kidlit focused meme It’s Monday! What Are You Reading From Picture Books to YA. You can find great reads linked each week or by search #IMWAYR on Twitter.

Dash by Kirby Larson – This is a middle grade must read for historical fiction. Mitsi misses her dog Dash terribly when her family is sent to an internment camp during World War II.

Abraham Lincoln: From the Log Cabin to the White House by Lewis Helfand – A graphic novel biography of the 16th president framed as a recounting to Tad Lincoln of his father’s life.

Teach Like a Pirate by Dave Burgess – A professional title that is all about increasing engagement in the classroom through creativity. This book gave me a lot to think about in terms of my teaching practice.

Reading this title after having it recommended at a number of edcamps and sessions on Makerspaces in the last year.

For history to come to life, you have to tell the story of people. A list of dates and names alone don’t tug at the heart strings. Picture books provide an excellent opportunity to connect children to the people and times of yesterday through the magic of artwork and story.  For this reason, I selected ten nonfiction and historical fiction picture books for Picture Book 10 for 10 #pb10for10.

These ten books reflect both well known events and ones that may not be as known. From the beginning of the American Revolution to the cultural revolution in China, from battlefields to the racetracks, these books will transport you to life in another time. 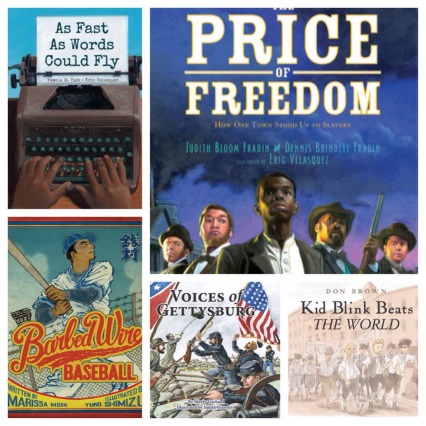 Henry and the Cannons: An Extraordinary True Story of the American Revolution by Don Brown – A winter expedition in 1775 to bring cannons to Boston.

The Price of Freedom: How One Town Stood Up to Slavery by Judith Fradin and Dennis Fradin. Illustrations by Eric Velasquez – Oberlin, Ohio in 1856 and the repercussions of the Fugitive Slave Act.

Voices of Gettysburg by Sherry Garland. Illustrations by Judith Hierstein – Different perspectives in the voices of participants in the 1863 battle and its aftermath.

Seabiscuit: The Wonder Horse by Meghan McCarthy. It’s the race of the Great Depression when Seabiscuit takes on War Admiral.

Take a Look at the New Google Drive

Posted on August 9, 2014 by pageintraining

Google Drive has a new layout that you can opt into right now by going to your Google Drive settings and selecting ‘Experience the New Drive’.

Two big changes were made to the Google Drive menu. The big red Create button has been replaced by the big red New button. You’ll also notice the upload icon is missing. You can still upload files and folders, but you’ll find those choices after you click the new button.

The other change is that Shared with Me has been replaced by the word Incoming. Any files that you do not own will appear under incoming.

The Incoming section will show an icon of the person sending you the file next to its name. You’ll have the choice to download it, add the file to My Drive, etc.  The vertical three dots symbol means ‘more actions’ in Google Drive. That button gives you quick access to making a copy of the file, starring it, etc.

For more about the New Google Drive, watch the short video below.

Two of my favorite Google Drive Apps that I taught last year were Lucidchart Diagrams and Lucidchart Press. Lucidchart Diagrams now has a Google Docs Add-On that allows access to complex graphic organizers right inside of a doc itself. Students can share their brainstorming process, create science lab reports, write their family history or show off their interior design skills using this Add-On.

Two weeks ago I shared how to create a very simple web based on a bulleted list using the MindMeister add-on. Lucidchart Diagrams allows students to add previously created diagrams to a Google Doc or to create a new diagram. Templates are available for Venn Diagrams, floor plans and many more options. Students can also create a Lucidchart from scratch. Many of the tools available inside Lucidchart Diagrams are similar to what you would find in photo editing applications: layering, image search, rotation, resizing and font options.

Watch the brief overview below. Please forgive the glitch at the beginning of the recording where you can see the timer. I was testing out ScreenCastify’s beta desktop recorder and it does truly record everything on the desktop.

It’s Monday! What Are You Reading From Picture Books to YA? 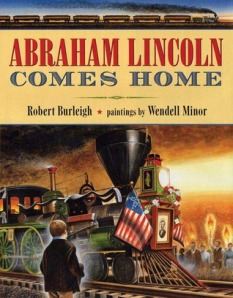 My summer class hit crunch time last week so my reading focused on classroom management and conflict resolution. A short historycation down to Springfield, Illinois also occupied a share of the week (More on the historycation later). I do still have a title I would like to share.

Abraham Lincoln Comes Home by Robert Burleigh – A picture book account of a young boy who watches the procession of Lincoln’s funeral train with his father. This was a gentle, poignant read.

In between my class wrapping up and professional development commitments this week, I still look forward to reading Dash. I should also finish Lincoln’s Grave Robbers by Steve Sheinkin. I also ended up with a few other titles from Springfield–history graphic novels! 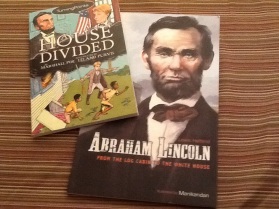 Twitter chats are a great resource for educators. If you are unfamiliar with the idea of Twitter chats, they are regular conversations on Twitter between different users on a particular topic. There are many different education chats that occur on a weekly or monthly basis. As a librarian, two of my favorite chats are #tlchat (Teacher Librarian Chat) and #titletalk. You can find many resources as well as a schedule of educational Twitter chats on Cybraryman’s Educational Chats on Twitter page.

Google Docs now offers a Twitter Curator Google Add-On. This would be a great tool to use to search for resources to share from a Twitter Chat or from a conference hashtag. You can save resources for later, but I think an excellent application would be to use Twitter Curator to share the power of the Twitter professional development community with educators who are not ready to take the plunge and join Twitter itself.

Watch the video below to see how Twitter Curator works. I used #nerdcampmi as my sample search.

It’s Monday! What Are You Reading? 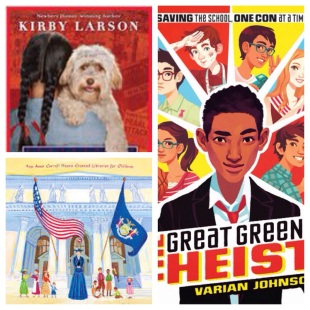 The Great Greene Heist by Varian Johnson – Jackson Greene has sworn off elaborate pranks and plans. He’s held out for four months, but when his ex-best friend faces unfair competition in the school elections, Jackson’s particular talents may be needed. Loved this middle grade heist-style story. It is one of the books being discussed in this week’s #sharpschu book club (Wednesday at 7:00 PM CT)

Dash* by Kirby Larson – This excellent middle grade historical fiction book comes out in August. Mitsi is forced to leave her home and beloved dog Dash behind when her family is forced to move to a Japanese internment camp during World War II. A kindly old woman took Dash in when Mitsie moved. I’m about halfway through this book.

The class I’m taking is heavy on the textbook reading this week, but I would like to at least:

*I received an arc of Dash as part of attending Nerd Camp Michigan.

Today’s #booksmile is Miss Moore Thought Otherwise by Jan Pinborough. Debby Atwell created the illustrations. This picture book biography recounts the life of Annie Carroll Moore, who was influential in the development of children’s librarians. She became a librarian at a time when many libraries did not allow children to check out books (or even enter libraries sometimes). One thing that made me smile in this book is that she was urging librarians to pull down their silence signs and read stories to children.

I was amazed at what Annie Carroll Moore accomplished with the Children’s Room when the New York Public Library opened in 1911. Children gathered for reading clubs, to see authors such as Dr. Seuss and even meet the king and queen of Belgium on a visit. What I liked most was how the Children’s Room remained a bright place for children even when hardships endured outside the libraries walls, such as wars and depressions. 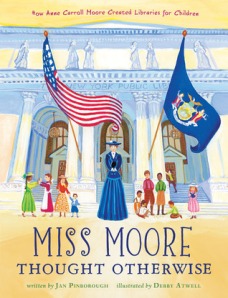 I borrowed this book from my local public library. It is one of my lifelong favorite places. Some of my earliest memories are visiting the public library while it was tucked inside a corner of city hall. I would pick out books from square bookcases covered in bright letters of the alphabet. My teddy bear spent an accidental night in the library during a blizzard after a visit (quite traumatic at the time). Whenever I walked in, I could count on finding books that I would love and discovering ones I would not have otherwise tried. I shared a bit more about that public library in my #whylib post.